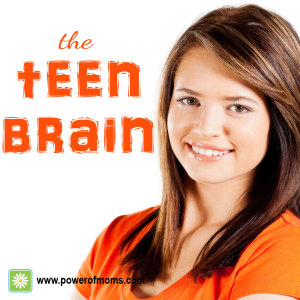 I like teenagers. The adolescent psychology course I took in college changed the direction of my life. I loved it so much, I decided to become a teacher and have had a life-long fascination with the teen brain.

As a mom, I’ve heard many times about the crucial brain development of infants. Conventional wisdom held that our brains were mostly formed by age 6, but recently, brain researchers have discovered that, in fact, there is some dynamic growth around puberty. There are a billion places you can go to read more about this—The National Institute of Mental Health is a good start—but the gist is this:

The brain is series of structures that conduct electrochemical impulses. So you perceive something in one part of your brain (this stove is hot) and that sends a signal to another part of your brain to do something (move your hand!). These impulses are sent along pathways, kind of like travelling down a road. If your thoughts drive the same “road” over and over again, your brain makes it into a highway so the signal can get there faster. In puberty, your brain is quickly building highways and bulldozing over roads that never get used. It is literally like a construction zone.

One part particularly under construction is the prefrontal cortex area. It is a part of your brain that is involved in impulse control, long term planning, and risk assessment. And it isn’t as well connected in kids as adults. So while you, as an adult, would think jumping off of a roof would not be worth the risk, an adolescent may think the fun would vastly outweigh the risk.

Interestingly, one of the parts of the brain that is mostly formed in adolescence is the limbic system. I think of this as the opposite of the rational prefrontal cortex. It is the more emotional core, the thing that drives us recklessly forward–which is good. Being a teenager can be scary, and if you really understood all the risks you faced and didn’t have something pushing you out of the nest, we would all live in our parents’ basements.

I don’t mean to be overly reductive. This is brain science we’re talking about; it is complex and many factors are at play. However, there are some simple take away messages we should remember as we help kids navigate these tricky neurological waters.

So what does this mean? Does this mean your forgetful teenager shouldn’t be expected to pick up her wet towel off of the bathroom floor? Quite the opposite. It means that while we can understand why she keeps forgetting, we know that the only way to learn to make the right decisions is to practice–reinforce that pathway.

So what do you do when your kids are little and they can’t reach the sink? Get the proverbial step stools out to help kids make the right decisions. Set up reminders (hey you–pick up your towel!), expect some mistakes, and be patient.

Everyone knows that immediate, rewarding feeling of having someone “like” your photo or getting a response to your text. But could the teen brain get so used to these dopamine squirts that it just doesn’t feel the value of grappling with a math problem or wrestling an essay to the ground? Teaching our kids to balance immediate and long-term rewards seems very important.

Our brains don’t come with an owner’s manual, which is a real shame. And surely neuroscience cannot be reduced to “if/then” statements. But I think as mothers of teenagers and soon-to-be-teenagers, it’s worth thinking about their brains in light of their biological development. It helps me be more patient, more understanding, and ultimately more amazed at the way they are growing. I feel so lucky to be a part of it.

If you’re interested in learning more, here are some additional resources:

NPR: The Teen Brain: It’s Just Not Grown Up Yet

FRONTLINE: Inside the Teenage Brain

UNSW TV: Inside the Adolescent Brain

QUESTION: How does thinking about your child’s brain development change the way you think about him or her? Could it change your approach to parenting?

CHALLENGE: Read or watch one of the resources above and share what you learn with another parent.

Edited by Sarah Monson.
Image from Shutterstock/Graphics by Julie Finlayson.

Amanda Hamilton Roos was born a little bossy and always really liked school. So naturally she became a teacher. Now that she's also a mother, she has found her passion is helping schools and families work together to help kids learn better. She investigates the nitty-gritty of school/family partnerships at Building the Bridge. Also, since she was 10 years old, Amanda has wanted to be a writer. So she blogs sporadically at Call Me Mandy. She hopes you'll make your 10-year-old dream come true, too!