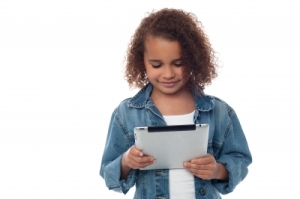 As a child growing up in the 70’s, my family had one television with three channels. Besides the occasional “After School Special”, for many years the only screen time we had was on Saturday mornings. (Saturday morning cartoons were the best!) It wasn’t because my parents were media nazis, it was because that’s all there was. (I know. It’s hard to imagine a world without computers and cell phones, let alone an archaic VHS player . . .)

Fast forward forty years, and my family has one large screen TV with cable, OnDemand, DVR, and DVD options, another smaller TV for the Wii, one desktop computer, one laptop, two iPads, four cell phones, and one iPod. The TV is the least used device in the home.

And the crazy thing is, technology continues to change. And rapidly. Whereas the big piece of advice for parents five years ago was to keep the computer in an open, public part of the home in order to keep tabs on its use, most homes now have multiple mobile devices floating around, many of which leave the home on a regular basis with different family members. And while many parents feel very strongly about not letting their children have Internet on these devices, I would contend that in another five years you won’t even be able to buy something so unsophisticated.

As the first generation of parents to deal with this type of pervasive technology in our homes and our lives, how can we even know what constitutes a good balance or if we are doing the right thing for our kids? Should we just give up and give in to a life full of screens?

Look. I want to live on “The Little House on the Prairie” more than anyone. I’m convinced I was born in the wrong century. But this is the world we live in–an extremely fast paced, tech-savvy world that runs on and revolves around “screen time,” and I for one think it’s time to redefine and rethink our battle with screen time, embrace it, and learn to use it on our own terms and to our great advantage rather than treating it like the enemy.

But what does that look like in real life? Every family needs to make their own decisions based on their own children and individual circumstances, but below are some things I think every parent today should consider when formulating a family media plan.

QUESTION: So what do you think? What’s your family media plan? Do you have one? Has it changed over the years? Did anything in this post influence your current philosophy and practices?

CHALLENGE: As needed, rethink and redefine your family’s relationship with “screen time” based on your individual family dynamics and current technology.

Allyson Reynolds and Erika Behunin, a licensed clinical social worker, were recently featured on KSL to discuss managing kids’ screen time. Click on the video below to watch.

A Midwest girl, Allyson met a California boy in Japan, and after getting married and living in all three places together, they have spent the better part of the last decade in the Mountain West with their four children, ages 11-21.
After many years of writing and speaking about motherhood for the Power of Moms organization, Allyson now produces The Sisterhood Podcast with long time friend, Tiffany Sowby. Along with creating episodes that focus on empowering and entertaining women, they hold monthly “Service & Sweets” events up and down the Wasatch front where they gather women to serve at a different service organization every month followed by a visit to a local treat shop. (For more information and to get involved, you can find them on Instagram.)
In a parallel universe, Allyson travels the world as a freelance writer and National Geographic photographer. In reality, she tries to squeeze in as many of her favorite things as possible (the great outdoors, photography, biking, cooking, living like a tourist) while trying to keep up with her busy family. Though woefully neglected, you can occasionally catch up with her on her blog, A Day in the Life and on the local daytime TV show, Studio 5.