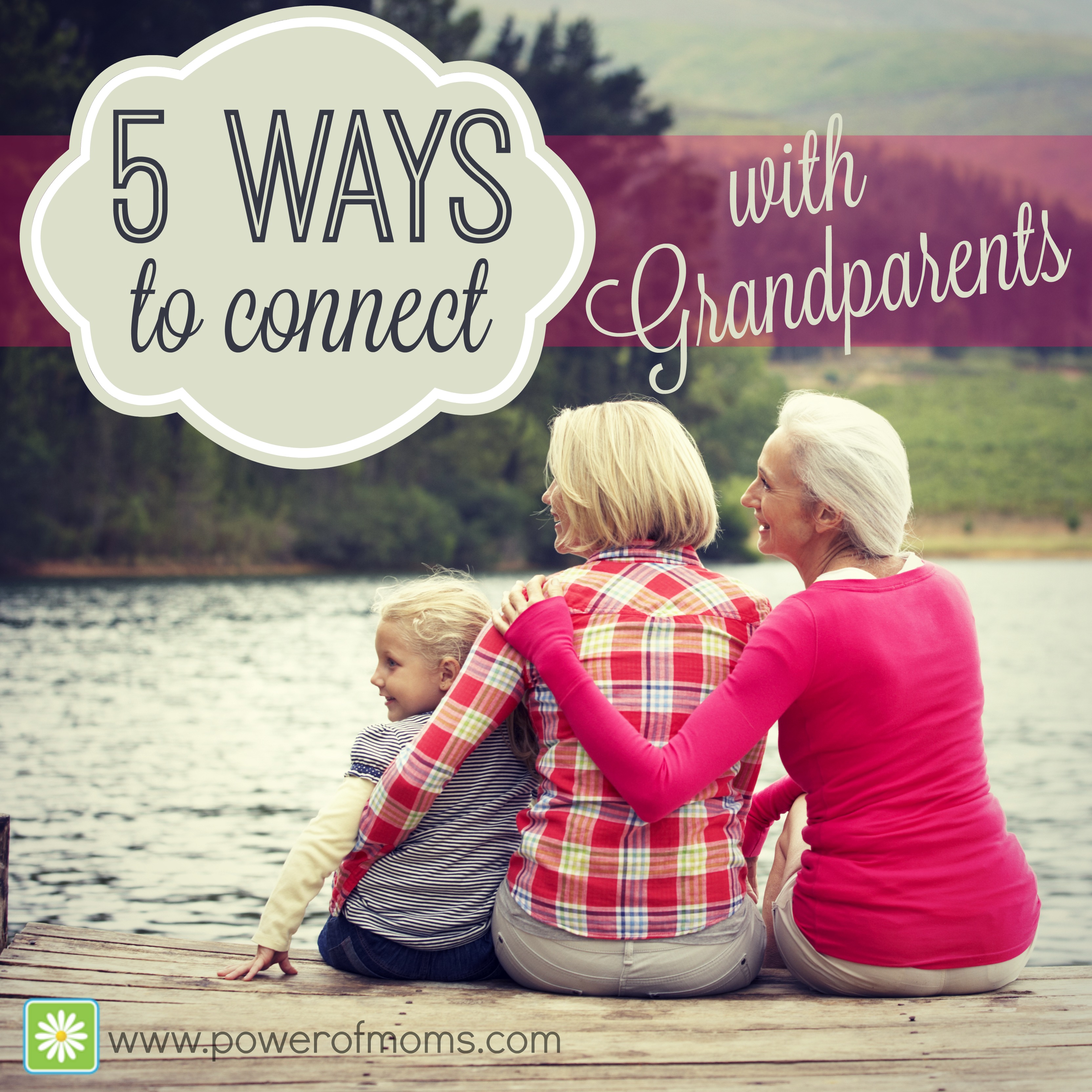 Holidays for our family often include a lot more grandparent time. My parents live nearby, and my husband’s parents live five hours away. We love visiting with all of them, and especially enjoy watching our children develop wonderful traditions and memories with their grandparents. However, sometimes it can be hard for the two generations to connect! Different personalities, ages, and interests can make it hard for kids and grandparents to find things to talk about.

The movie Parental Guidance really highlights (with a lot of comedic license) some of these differences between generations. In this movie, the parents come to their daughter’s house to watch their grandchildren while she and her husband are out of town. These grandparents don’t visit often, and as they look at photos on the mantle they see several examples of the grandkids having a ball with the husband’s parents. Then, shoved in the corner behind those photos, they find one tiny picture of themselves. The grandmother looks at her husband with concern and says, “You know what we are? We’re the other grandparents!” To which her husband comedically responds, “Well, we can’t be all four.”

While I realize this movie is a bit extreme, I don’t want there to be “other grandparents” in our family. I want my children to love and connect with all of their grandparents and really get to know them.

Here are five tips that have helped our family encourage a little more togetherness between grandparent and grandchild:

Some grandparents aren’t sure how to interact with children, which is something I remember from when I was little. Recently the Power of Moms Facebook page posed a related question, and many readers commented on having similar difficulties. To help set up grandparents and kids for success in this area, we like to bring things with us to visits that help initiate conversations and memorable moments.  These are simple things like books, puzzles, board games, movies, etc. Grandparents and children want to connect, but sometimes they just don’t know where to start. Have your child bring a stack of their favorite picture books and encourage them to ask Grandma or Grandpa to read to them. Call everyone to the table for a round of a favorite game. Nothing is more fun to me than seeing all of us around the table from the six-year-old to the 70-year-old taking turns bumping people out in a rousing game of Sorry. 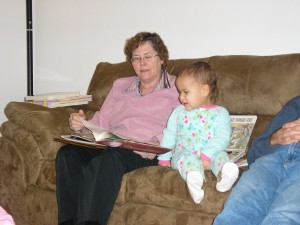 Grandparents are a wealth of knowledge and skills, so why not take advantage! Have your children ask their grandparents about their hobbies and talents. What did they like to do when they were younger? What do they like to do now? Is there something they enjoy that they could teach a grandchild? Or something the grandchildren could teach their grandparents?  My daughter has had a long-running obsession with baking. My husband’s mother is a wonderful baker, and many times when we go to visit they will make cookies together. It is something they both enjoy, and my daughter has been able to practice her baking skills as well as learn from her grandmother.

Over the years I have found that the grandparent-grandchild dynamic changes significantly when we go on an outing together. We have gone to many places together, including museums, theme parks, the library, the beach, and the mountains.  Going somewhere as simple as the neighborhood park brings out a different side of the grandparent-grandchild relationship. Even grandparents who are a bit more serious can be found laughing and acting a bit silly when their grandchild asks them to go down the slide or ride the teacups. One of my children’s favorite outings is a special day at Disneyland with their grandmothers. We only do this once every few years, but it is so fun to watch the children take the lead and see the grandmas play right along with them. 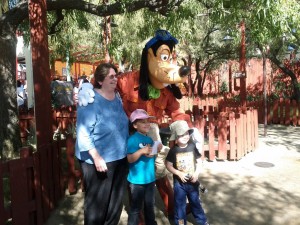 When we’re the ones visiting the grandparents, it can be nice to let the grandparents take the lead and then follow what they’re doing.  On our Facebook discussion, someone commented that she would sit with her grandparents while they watched their favorite television show. Relationships are about compromise and give and take, and I think this is a great way to teach that.  I was thinking about this when we went on a trip recently to visit my husband’s parents and really wanted to do something my father-in-law would enjoy. We decided to ask him ahead of time to plan a small, simple hike that we could go on together. He is very active and enjoys going for long walks and hikes, which is something we don’t often do.  He chose a good place to go near the house and even had little notepads and pencils for the kids so they could take notes on things they saw. He pointed out the different varieties of vegetation to them (who knew there were so many different types of cactus?) as well as animals they saw or heard along the way. Grandpa was in his element, and although there was a bit of complaining here and there from my youngest, we all had a great time.

We have spent most of the past 10 years living far from our parents, and during that time visits only happened about once a year. When our parents would come for a visit, the kids would spend the first couple of days getting reaquainted with them, only to have their grandparents go home again a few days later. My husband and I would sometimes refer to them as “visiting grandparents,” because that’s how it felt.  Then, shortly after one particular visit from my husband’s parents, two letters arrived in the mail. Grandpa had written one to each of our children. The letters not only said how much fun he’d had while visiting, but they also asked the kids questions and even included a few photos. They were excited to write back (or draw, since at the time since they were quite young). This started a correspondence that went on for almost a year.  With phones, email, video calls, and—yes—even snail mail, there is no reason we can’t stay connected in between visits. Maybe your kids could write letters to their grandparents and get the ball rolling. Did you go anywhere recently as a family that would be fun to write about?

If the grandparents in your life live close by, invite them to participate in family activities. My parents enjoy coming to dance recitals, school performances, and holiday gatherings. Grandparents won’t always be able to attend, but inviting them lets them know you’re thinking about them. 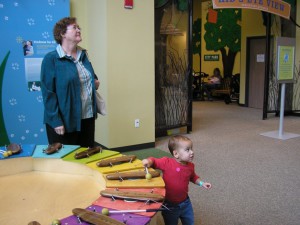 Grandparents are wonderful, and the grandparent-grandchild relationship is a special one. I treasure the memories I have of my grandparents who have passed away, and I love visiting with my grandmother who is still here. Spending time with them and getting to know who they are has influenced me in so many valuable ways (I even named my first child after one of them because of our bond). I hope my children will be able to say the same about their grandparents.

QUESTION: What things have you done as a family to help your children connect with their grandparents?

CHALLENGE: Pick one idea from this list that you can use to help your children connect with their grandparents this week.

I am a mother of a 7 year old girl and a 4 3/4 year old boy (no more, no less according to him). They are "mini-me's" of my husband and I in looks and personality, and we love it! Life as a mother became even more interesting when at the age of 3 each of them were diagnosed with autism. With a lot of help and love they are both doing wonderfully and I wouldn't change a thing. In the last year I have added another title to my list of motherhood roles: foster/adoptive mom! It's been an eye opening experience to help these little ones who just need somewhere to go for short term, and we hope that we will be able to adopt through this process as well. While a native of Southern California we currently live in the beautiful Bay Area.