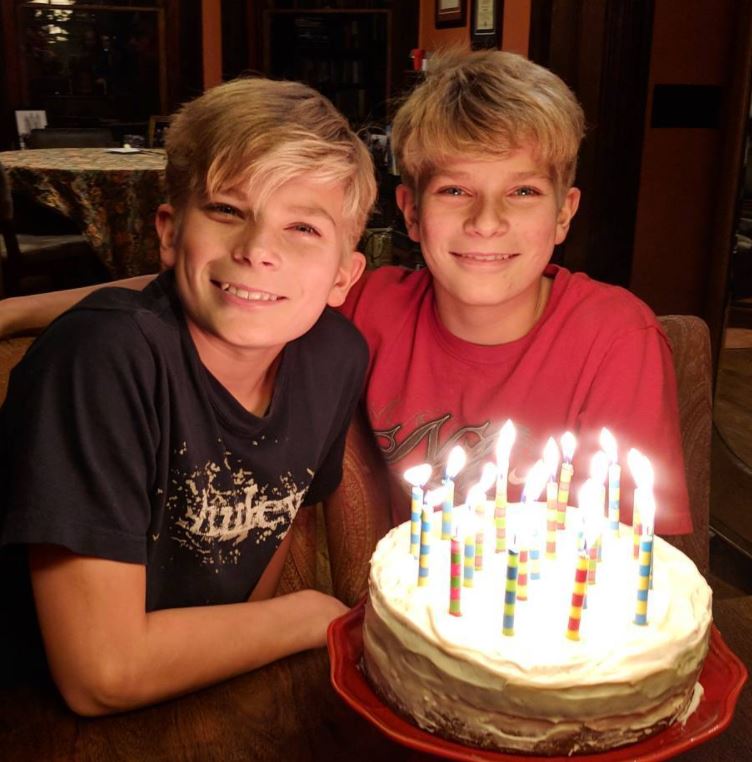 Saren’s twins, Oliver and Silas, celebrating their most recent birthday

With my husband, Jared’s birthday a little while back, my son Ashton’s birthday last week, and my twins’, Oliver and Silas’s birthday coming up, I’ve been thinking about what makes a birthday good (both for the one having the birthday and the mom behind the celebrations!).

Here are a few tips that have worked really well for birthday celebrations in our family:

It’s all in the presentation.

The important thing is not so much what our kids get to do or what they receive on their birthday – what often matters even more is the anticipation, the special attention and special treatment, and the presentation of whatever it is that you do for their birthday.

It’s great to start talking about their birthday a week or two in advance, asking them about what favorite meals they might want and what activities they might want to do. Talk up how excited you are to celebrate one of your favorite people in the whole wide world and how glad you are that they came to your family. Anticipation and special attention make things more fun!

You can put a birthday “spin” on just about anything. The most mundane things can be very special when they’re presented the right way. And the most fabulously exciting things can be quite dull when presented the wrong way. One year, although Ashton wanted egg burritos for his birthday breakfast, we didn’t have any eggs in the house after getting back late the night before from our road trip and he was pleased as punch with oatmeal (which actually is one of his favorite breakfasts) when I told him I’d put extra birthday sugar and birthday raisins (extra nice plump ones) and the birthday boy could even add chocolate chips if he wanted to.

King or Queen for the Day

The birthday kid is king or queen for the day – they to pick all activities and they get to choose all three meals. Pretty much anything they say goes all day. For one day a year, everyone should get to be royalty – especially in a big family where getting your own way doesn’t happen all that often.

Have a birthday tradition (bowling or swimming or biking or whatever the birthday person really loves doing – it makes it easier to plan a fun birthday if there’s at least one set activity – and it’s so fun to have photos each year of the child growing older while doing the same activity. The tradition may evolve and that’s OK. Ashton’s birthday tradition started off as bowling but after the fun party we had one year, he decided his tradition would be eating his cake in an unusual place. Then a couple years later after we moved to an area near ski resorts, he decided his tradition would be skiing. Meanwhile Eliza has stuck with the same tradition since she was 2 years old – she has a tea party and decorates heart-shaped cookies since her birthday is the day before Valentine’s Day.) My dad has a late fall birthday so ever since we were little kids, we’ve raked up leaves and jumped in them and played in them as his birthday activity. To this day, all 47 members of my extended family still jump in/play in leaves for my dad’s birthday – wherever they happen to be in the world – and they usually send him photos of their leaf frolicking and/or a few pressed leaves from their leaf activity along with a nice note. He cherishes that so much and it’s something that bonds our family on October 28th every year!

Create some special time for just you, your husband and the birthday kid. Let them pick a game they want to play, just the three of you, take them out to lunch, whatever they want to do with the two of you when the other kids aren’t around. Giving them your undivided attention is a great birthday gift.

The night before the birthday or the night of the birthday, tell the child the story of his or her birth. Include fun details and tell it with lots of energy and love! Include photos if you can. It’s so fun to think back on the wonder of their birth and to share that with them on this special day.

Have everyone share what they love about the birthday boy or girl.

Sometime during the day (like at breakfast and/or dinner), have everyone present (siblings and any extended family or friends who are there) share one thing they really appreciate about the birthday boy or girl. My parents did this when we were growing up and now I think all my siblings have carried on this simple tradition with their kids. There’s nothing like compliments to make you feel great. And it’s a good thing for the other children in your family to learn to think about what they like and appreciate about each other.

Most kids appreciate time, services and special activities as much or more than they want stuff.  I like to keep the expectations nice and low – then they’re so excited and grateful for anything they get! In our family, they can choose an activity or a present that costs up to $50 plus they usually get a small gift or some money from their grandparents and homemade cards (usually with “coupons” for everything from a back massage to doing their household chores for them) from their siblings.

If you do a birthday party, you can simplify things and cut down on the excess stuff in your home by specifying that attendees don’t need to bring gifts. Many years, our children have asked party attendees to bring a small cash donation towards a charity they’ve learned about in lieu of a gift. They have been pretty excited about the idea of giving to those who have so little rather than getting things they don’t really want or need.

Have the birthday child really thank each gift giver when they open a gift. I’ve been to parties where the birthday boy or girl just tears through the presents with hardly a thank you and not only does that seem sad for the giver, but the birthday kid doesn’t get a chance to thoroughly appreciate and recognize what is great about each gift. As he or she takes the time to thank the person, maybe say what he/she is going to do with the gift or express how perfect the gift is, and maybe get a quick photo with the giver and the gift (to use on a thank-you note or thank-you email), the giver and receiver are learning a lot about gratitude.

You don’t need to have a big birthday party every year.

To limit expense and stress and add variety, we limit birthday parties to every other year. We’ve found it works really nicely if each child has a party (like 10-12 friends with planned activities and dinner and cake and ice cream and all that) one year and then a special family activity (like bowling or going to the zoo or a water park – sometimes they’ve invited a close friend or two) the next year.

Some of the best parties are often pretty simple and cheap.

These are just a few ideas based on what has worked well in our family. What are some further tips or ideas you could share?

Saren adores her five energetic, adventurous kids (ages 13-18) but doesn't totally adore the mess and busyness and bickering that that comes with them! She grew up all over the world, got her Bachelor's degree at Wellesley College and did her Masters in Education at Harvard University (these days, the diplomas on her wall mostly serve as visual aids when she's trying to convince her all-too-smart teenagers that she DOES know a thing or two!). She went on to design and implement enrichment programs for kids and training programs for teachers. But it was only after she finally found her wonderful husband, Jared, and had five children in five years, that her education and work experience began in earnest!

When she's not trying to answer five - or six - different needs and questions at once, she works on this website (she's Founder and Director of Power of Families).

She currently lives in Ogden, Utah and loves reading, hiking, and biking with her family (or by herself when possible!). She often struggles with balance but finds joy in being involved in many things that are meaningful to her.