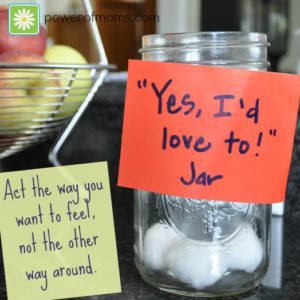 Many months ago, I heard about the “Yes, I’d Love To!” Jar on a Power of Moms podcast. My darling children became my guinea pigs. The idea is simple:

Of course, the darlings liked the ice cream idea. And it became somewhat comical how fast they could fill the jar up (like, in five minutes) by asking ridiculous questions and rushing to make a basket. Then I told them we had to play for real. And so we began.

“Nelson, would you please get me a fork?” Brynne asked her brother.  Instead of saying, “Get it yourself,” he caught himself. “Yes, I’d love to, Brynne.” His tone was somewhat sarcastic, but he still handed her a fork.

“Mom, would you please get me some milk?”  Instead of saying, “I just sat down,” or “You have legs,” I tried to set an ever-so-cheerful example with, “Why, yes, I’d love to!”

“Cope, would you please cut me an apple?”  Instead of a flat, “No,” Cope sighed, eyed the jar in need of filling, and responded, “Why, yes, I’d love to.” She embellished her answer with some eye batting and a high-pitched Cinderella voice.

Maybe we’re just competitive. Maybe we like games. Maybe we just wanted ice cream, but the jar began to fill. And seeing the jar fill made us want to fill it faster.

At first I wondered if I was teaching my children to be fake or to act a certain way for a prize. But then again, we nudge our children all the time to do things they don’t actually feel like doing. “Say thank you.” “Tidy up your space.” “Be kind to the new kid.” “Write a note.” In fact, isn’t that what parenting is all about? Do the thing you really don’t want to do just because it’s the right thing to do!

This quote from philosopher and psychologist William James explains the concept perfectly: “Action seems to follow feeling, but really actions and feeling go together; and by regulating the action, which is under the more direct control of the will, we can indirectly regulate the feeling, which is not. Thus the sovereign voluntary path to cheerfulness, if our cheerfulness be lost, is to sit up cheerfully and to act and speak as if cheerfulness were already there.”

Armed with James and his mighty words of wisdom, I felt completely justified in training my guinea pigs with the “Yes, I’d Love To” jar.

As an avid fan of Gretchen Rubin’s podcast, I loved her advice in episode #42. The topic was, “Act the Way You Want to Feel.” In Rubin’s book, Better Than Before, her research suggests that if we want to feel a certain way, we can act that way first.

I found that to be so true when I was at home with little kids. Just the act of changing out of my pajama bottoms and doing my hair as if I was going to a real job—which motherhood surely is—changed my whole day from slogging-through to happily mothering.

When I’m irritated and snappish with a child, it works wonders to laugh. Or hug. Or smile. Isn’t it the truth that when we speak more kindly, we feel more kindly? It doesn’t really matter if we want to get a fork for our child. Get the fork. It makes her happy. And guess what? Acting kinder makes us happier, too.

Brain research also supports this idea. Act the way you want to feel, not the other way around. If you’re walking around yelling and slamming doors, that only makes you want to yell and slam some more doors. Your brain says, “I must be really angry!”

Harvard research says that the act of giving thanks actually makes us feel happier. Such a simple and quick fix for general grumpiness. I used to hear that boys should go “punch something” to get their aggression out. Perhaps they should make some cookies for the neighbors instead. Feeling shy? Introduce yourself! Suddenly you’re confidently chatting your way through an awkward social situation. This research even suggests that people who use Botox are less prone to anger because they can’t make angry, frowning faces!

I experienced this phenomenon the other day. I was feeling pretty miserable. My energy was low. I had to take a car full of kids to a neighboring town, lead a youth activity, and then drive everyone home again.  Growling would just not do. (Not all of the occupants of the car were my kids.) I wished I could just lay in bed, read, and be served warm toast. Instead, I got out of my sweats and pulled on a pair of jeans. I put my hair in a ponytail, slapped on some mascara, and started the carpool.  By the time I got home, I was a completely different person. I was actually happy. Was I being fake? I don’t think so. I think by choosing to act like I had energy, I actually started to feel energetic.

So I ask you—how do you want to feel? Then act that way.

The result of the “Yes, I’d Love To” jar experiment was this: over time the darlings lost interest in putting cotton balls in the jar. But I did notice that the “yes, I’d love to” phrase hung around much longer. It still comes out of everyone’s mouth once in awhile. The jar works best if it’s on the counter for awhile and then put away for a season. It hasn’t been out for months, but I think it’s time again. The dishwasher needs emptying.

QUESTION: Have you had an experience where acting differently about something changed how you felt?

CHALLENGE: Take some time to notice your attitude about things you do throughout your day or about situations that you encounter. Choose something you’d like to be more positive about, and choose beforehand how you will respond more positively the next time. Write down your plan and record your results.

Edited by Lisa Hoelzer and Katie Carter.
Image from the author, graphics by Julie Finlayson.

Amy Makechnie is a writer and mother to a wily flock of children. She blogs at maisymak .